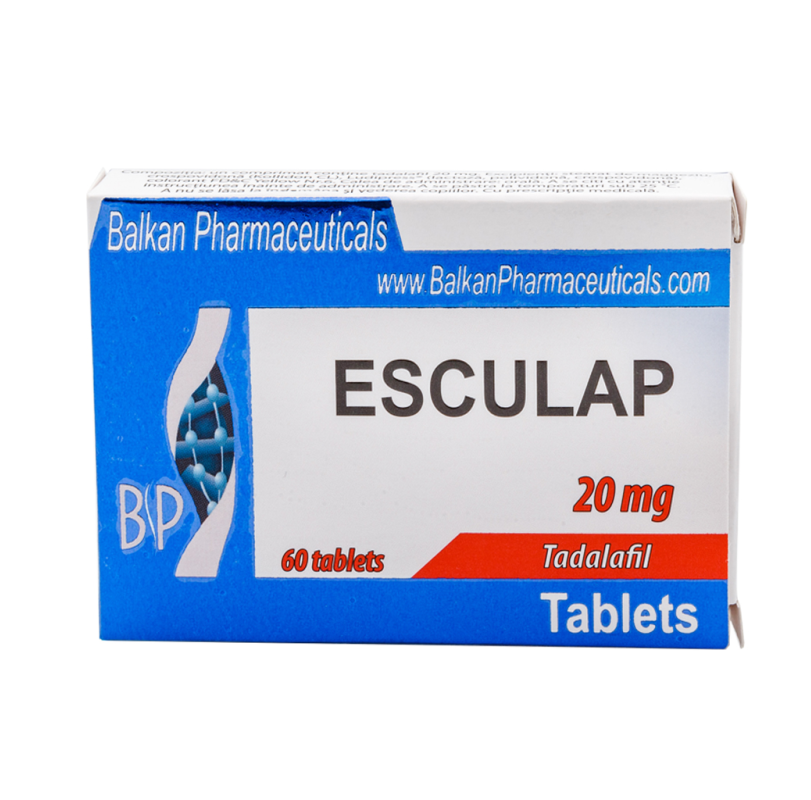 Erectile dysfunction is a problem for many men of different ages. This topic is sometimes taboo in society, which is bad for its solution. One always stands and wants to be ready for a hot night out.

Fortunately, society is evolving, offering many effective solutions to the problem of erectile dysfunction. One such solution is Esculap tablets, which contain 20 mg of the active ingredient.

The manufacturer of the tablets is a popular pharmaceutical company Balkan Pharmaceuticals in the world. The manufacturer has long established itself as a respectable and recognized brand. Preparations of the company are used throughout the world, they are gaining many positive reviews.

Esculap 20 mg (Tadalafil) from Balkan Pharmaceuticals is produced in a pack of 60 pills. Like most erectile dysfunction drugs, Esculap 20mg contains phosphodiesterase type 5 (FDE5) cGMP and the active ingredient is tadalafil. FDE5 actively affects the penis by relaxing arterial smooth muscles and increasing blood flow to the tissues of the penis. Thus a man gets an erection.

Esculap 20mg (Tadalafil) proves its positive effect on solving the problem of erectile dysfunction. Its effect lasts for 36 hours.  The effect appears 16 minutes after taking it in case there is sexual arousal. It is recommended to take esculap 20mg, not more than once a day. In addition, there are no contraindications for eating before taking the drug. The time of intake - morning, afternoon, or night - also does not affect the effect of Esculap 20mg.

According to numerous studies conducted on the drug esculap 20mg, the tadalafil included in the composition does not cause negative effects on the body in healthy people. In addition, the drug does not affect the number and concentration of sperm, as well as sperm motility.

It is worth noting that against a background of high libido or already having an erection, taking esculap 20mg may cause a prolonged erection, which will not stop for a long time. In this case, it is recommended to reduce the dosage.

Specialists recommend taking esculap 20mg for middle-aged men. The great advantage of the drug before Viagra and many other popular drugs for the treatment of erectile dysfunction is that the penis is erect only when exposed to it.

Contraindications for taking esculap 20mg include: individual intolerance to tadalafil or other components of the drug, taking drugs with organic nitrates in the composition, age under 18 years, renal or hepatic failure, and heart disease.

It is worth noting that people with heart problems, in general, should be careful about sexual activity.

Despite such a short list of contraindications and almost no side effects, it is recommended to consult with your doctor before taking esculap 20mg.

To date, you can find many reviews on the network about any medication, including the drug Esculap. According to them, the drug has a positive effect in most cases. Men of different ages note a long and quality erection.

According to some studies, in only 7-10% of cases, unwanted side effects from taking esculap 20mg were reported. Among them: are headaches, back pain, blood rush to the face, stuffy nose, and in some cases, swelling, and conjunctivitis.

In addition, consumers note the acceptable cost of the drug. This is due to the policy of the pharmaceutical company Balkan Pharmaceuticals to offer affordable drugs. The manufacturer strives to become affordable for the majority, which makes it one of the significant market leaders. You can buy the drug on the manufacturer's official website or on the websites of various online pharmacies, which have proven themselves and have an excellent reputation.

Be the first to write your review !